Get fresh music recommendations delivered to your inbox every Friday.
We've updated our Terms of Use. You can review the changes here.

from This Time It's On Fire by Tower of Fire 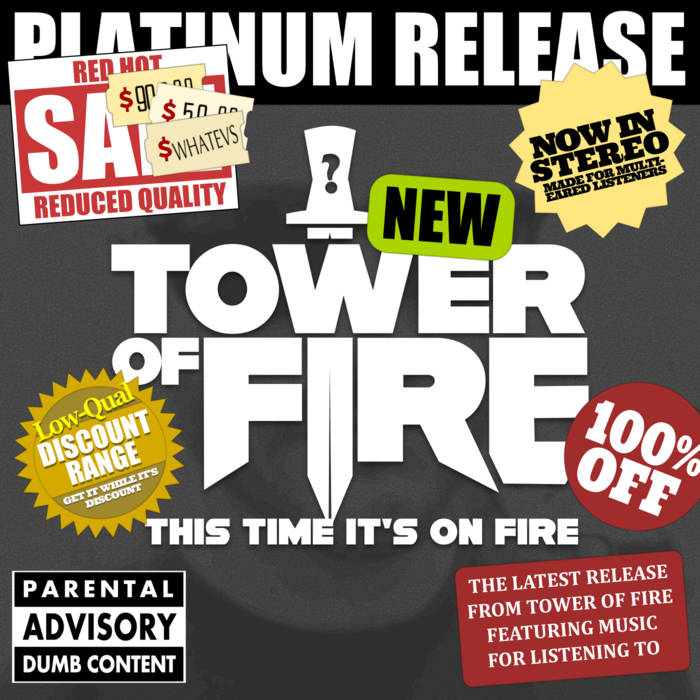 This is a tale of the not at all distant present, and the twelve subsequent minutes thereafter
As our band of merry bandsmen, who are blacksmiths, who stick to their blacksmithing
Go to win the battle that they need to win
A battle against the Blacklord’s repression, and haunting odours
One plan to win, not to lose

To win, win the battle, of the story, of the song, of the album, of this band, of the Tower, of the Fire
Yes. I believe that some of the previously mentioned things will probably occur.

Our destination is twelve minutes away and we’ve already been walking two or three
And at the end is the end of our journey and the middle bits are all in between
And we plan to walk the walk for the whole way even if it takes twelve minutes from our day
But this quest it is the best and it will pay; our glory quest it’s glorious; the quest for glory
Glory, G-L-O-R-Y glory

Place one foot and then the next and then repeat, that is how we walk upon our walking feet
And we also have to sometimes bend our knees, and we tend to lift our thighs as we please
Step by step we go towards the desired place, until suddenly we wind up lost in space
Oh wait it turns out it’s not space, but we thought that it was definitely space
Space, G-L-O-R-Y space

We don’t want the mosh bus to ever break down / Not far to go, what is the time

Surprise, we were tellin’ lies, about the runnin’ time, it’s thirteen in disguise
And this bit only makes it longer and it doesn’t fit the song, why did we ever even bother
This will become twelve minutes long

It’s just a total fuckin’ rip, and we can’t believe we got you, but it has become ...
This has become “Eleven Minute ZOMG”

Bandcamp Daily  your guide to the world of Bandcamp